In this article, I attempt to explain the current CGIA display architecture. Note that the CGIA is optimized for productivity, so features like sprites don’t (yet) exist in this design. Where possible, I’ll discuss opportunities for inclusion of such features going forward.

The CGIA consists of a few components that all work together to form a cohesive whole. Before explaining how all the pieces fit together, I need to explain what their respective roles are first.

The name of this component is a bit of an anacronism; not many display devices today use cathode ray tubes (CRTs) anymore. However, as it turns out, LCDs, plasma displays, OLED matrices, and more are all driven with a similar interface.

The CRTC’s primary job is to synchronize the video display enough to display a stable image. For this to happen, the CRTC must tell the display device when a new raster line of video is coming (Horizontal Sync, or HSYNC) and when a new frame is to be displayed (Vertical Sync, or VSYNC). For this reason, the CRTC is responsible for generating the HSYNC and VSYNC signals.

Since the CRTC knows about the physical nature of the display, it necessarily also knows about the logical structure as well. For example, you might think a 640 pixel display occupies the full screen width, but it really floats in an 800 pixel raster line. Depending on where you place the 640 pixel logical line, you can make the screen move left or right relative to the monitor’s edges. Thus, the CRTC is also responsible for telling the rest of the CGIA when to draw graphics and when not to.

Each visible line of graphics is a representation of some state in memory. The fetcher is responsible for reading enough data into the CGIA’s line buffers for it to render the next line.

To accomplish this, it must steal the bus from the CPU (assuming the CPU already has it) for some amount of time. For example, a monochrome, 640-pixel wide display consists of 640 / 16 = 40 halfwords. So, by configuring the fetcher to read 40 halfwords at a time, it will read just enough video data into the line buffers for the other parts of the CGIA to render the scanline.

The Feeder accepts video data from the line buffers, and coordinates data flow into the shifter module. In a certain sense, this is a lot like your heart: while your heart is not responsible for conveying oxygen to your cells, it is responsible for ensuring proper blood flow throughout your body. It does this with, among other things, a regular heartbeat. So it is with the feeder: it is responsible for addressing the correct halfword from the line-buffers, and telling the shifter when to reload from the addressed data (just like a regular heartbeat).

The Shifter is responsible for actually interpreting the raw halfwords fetched by the Fetcher. The following table illustrates how pixels are packed:

They are packed as follows:

Each color is pushed out of a color index bus, sometimes more simply referred to as just the color bus. Up to 256 colors are supported.

The Color Look-Up Table is responsible for translating the color indices found on the color index bus into the red, green, and blue triples used by the VGA monitor.

The register set is a block of program-accessible configuration settings which allows software to control the operation of the various CGIA components. For example, one “palette register” exists for each of the 256 supported colors. Other registers exist allowing the programmer to select different horizontal resolutions, color depths, etc.

Refer to this (poorly drawn) diagram: 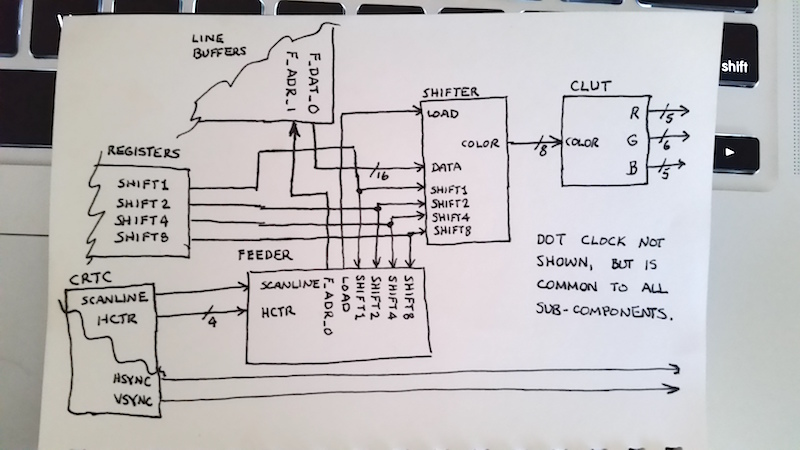 If we work our way backwards through the CGIA, we first encounter the CLUT. This is a fairly simple device; the color bus selects one of 256 color registers, the results of which will appear on the R, G, and B component buses. Externally to the CGIA, a R/2R DAC is used to create analog voltages, and this is what drives the video signals on the monitor.

The CRTC is responsible for generating the HSYNC and VSYNC signals; these are pretty simple, so I won’t take more time describing them.

Asserting the load signal also causes the feeder to increment the line buffer fetch address. This circuit depends on the CRTC negating the scanline enable signal after the scanline is finished drawing. Otherwise, this circuit would continue to fetch data from the line buffers, even wrapping around to the beginning after done. You would be able to test this by, for instance, configurating the CGIA for a 640 pixel display, but configuring the fetcher to read only 20 words.

The programmer-configured shift1, shift2, shift4, shift8 signals are used to tell the shifter how much to shift its register by. This, in turn, also determines how many significant color bits exist on the color bus. It also affects how frequently load is asserted (for reasons explained above), which is why both the feeder and the shifter require knowledge of which is set. The feeder always knows which pixel is being displayed because it receives the four least significant horizontal pixel counter bits on the hctr input.

It is also required to fetch video data from the line buffers at the beginning of a scanline too. This is why the feeder takes a scanline enable input from the CRTC.

NOTE: I might decide to move the hctr counter into the feeder itself at some point, as I think this will be necessary to support fine-grained horizontal alignment of the display. It would be reset to zero when the scanline input negates, and would increment monotonically otherwise.

Not shown on this diagram (mainly because I ran out of room) lies the fetcher, which couples to the video memory. When the CRTC asserts the scanline enable input to the feeder, it also commences another memory read from video memory via the fetcher. This will deposit data into the line buffer not used by the feeder. The CTRC, as you might imagine, would also be responsible for telling which line buffer the feeder should read from, and which the fetcher would write to.

As I write this, the following components appear to be completed:

The register set will be the last thing to be implemented, since its interface naturally depends on the final configuration of the CGIA’s parts. The CRTC and CLUT components do not hold much risk, and so should be fairly easy to implement. I’m hoping to have these components wrapped by this-coming Monday.

The fetcher is just a normal Wishbone bus master, so detecting when it releases the bus is a trivial matter. When this happens, it’s entirely possible for additional modules to assume control of the bus. These modules can support things like sprites, texture engines, blitters, etc.

Considering sprites in particular, as I think I’ll add a number of sprite engines in the future, implementing sprite fetchers is a trivial task. (It’s the same code as the normal CGIA fetcher, but it addresses a different set of buffers.) Serializing sprite information will be a tad more tricky, as its timing parameters differ from the background playfield. However, in principle, each sprite works exactly the same way as the normal playfield. it requires a separate, parallel set of components. Each sprite will need its own feeder, line buffer, and shifter components. If they all derive their basic timing from the CRTC, then synchronization issues should not be a problem.

Finally, a simple multiplexer can switch between playfield and sprite data on a pixel-by-pixel basis. It would sit directly in front of the CLUT (or, it could be an integral part of the CLUT module).

While individual components may not pose any significant risks, their integration poses significant risk. By which, I mean, nothing is likely to work right out of the gate.

I’ve tried my hardest to make things as testable as I can, in the hopes that the finished product not only is synthesizable, but has a high probability of “just working”. I know this will never happen in real life; but, until I have a real FPGA board to work with, I have no idea if this circuit will actually work.

Another big risk with the CGIA design is how many FPGA resources it’ll consume. I’m hoping I can fit a minimal CGIA sans sprites into an iCE40HX4K package, preferably along with keyboard, mouse, and SD-card I/O as well.

The CGIA represents a quantum leap from the MGIA. It offers a greater array of video modes, and for the first time, supports color. It is also expandable, so it is relatively easy to add support for things like sprites.

Samuel is or was:

Samuel seeks inspirations in many things, but is particularly moved by those things which moved or enabled him as a child. These include all things Commodore, Amiga, Atari, and all those old Radio-Electronics magazines he used to read as a kid.

Today, he lives in the San Francisco Bay Area with his beautiful wife, Steph, and four cats; 13, 6.5, Tabitha, and Panther.